The International Forensic Week 2021 is running from 25 to 29 October and entails a series of lectures devilered by World Renowned Experts. This event is organised by the Malaysian Society of Forensic Medicine and Science in collaboration with the Ministry of Health Malaysia and the Department of Forensic Medicine at the Hospital Pulal Pinang. Speakers presenting include Professor Vanezis, Professor Beh, Professor Milroy, and others. For registration please fill in this form.

This event is free to attend for any present or past student of the Academy.

In a National Patient Safety alert issued on 18 August 2021, Public Health England (PHE) said that there have been an “unprecedented number of overdoses” and testing has showed that three cases involved heroin adulterated with the synthetic opioid isotonitazene. “Isotonitazene’s potency and toxicity are uncertain but perhaps similar to, or more than fentanyl, which is about 100x morphine,” said PHE. At least 46 poisonings and 16 deaths have been reported and have been linked to isotonitazene.

Physical fit analysis (PFA) entails physically fitting fragmented evidence together to determine shared origin. PFA can be challenging to conduct with bone fragments particularly when fragile, sharp, or embedded in other materials. Three-dimensional (3D) imaging and printing techniques can circumvent these challenges. Two different 3D imaging techniques were compared and by generating virtual 3D models and prints of burned human bone fragments, the suitability of these techniques was tested. It was found that 3D imaging and printing allowed for effective PFA without excessively handling the original fragments.

The Faculty has some new exciting courses to offer you and hope you will share our enthusiasm and spread the word.
Our new Online Pharmacy History Explorer Course has just opened and will be available until the end of October 2021. Learn at your own pace and join us on either or both of our live discussion dates with speakers and course organisers: https://www.apothecaries.org/apoth-explorer-course/
The History of Medicine Course (https://www.apothecaries.org/the-history-of-medicine/) and Philosophy of Medicine Course (https://www.apothecaries.org/the-philosophy-of-medicine/) will form a blend of in-person and online days. We already have participants from all of the world joining our courses this year!

The Faculty offers a student rate for the course, the examination fee is separate. The Faculty is able to offer limited exam bursaries that will cover two thirds of the exam fee. The criteria is on each of the course page links above. Entrance to the course will close on 1st November 2021. Please contact Maria Ferran directly with any questions on: facultyhp@apothecaries.org or directly via Society of Apothecaries website on: http://www.apothecaries.org

Envenoming syndrome is a systemic toxic reaction to the inoculation of large volume of insect venom, typically after a swarm attack from bees. Africanized honey bees are notorious for their aggressive nature, and human deaths resulting from Africanized honey bee attacks are consistently reported. Whereas anaphylaxis is the most common lethal mechanism of injury, delayed deaths can also occur as a consequence of severe venom toxicity with resultant end organ damage. Acute renal failure complicating massive envenomation is a rare but potentially fatal outcome after Africanized honey bee attack and may be heralded by laboratory evidence of rhabdomyolysis. 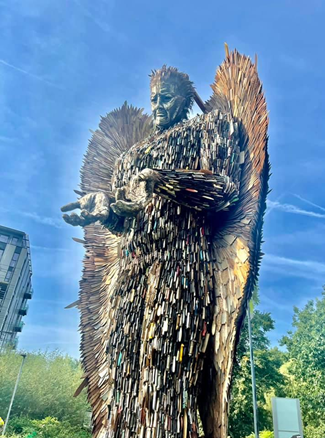 On Monday 6th September a Knife Angel was erected in Central Park, Chelmsford. The statue is dedicated to victims of knife crime.
Unveiled in 2017, the statue has travelled to locations around the country warning communities of the consequences of knife crime and aggression. It is first time the sculpture has come to Essex. Luisa Di Marco, the founder of Keep It 100 Essex, a charity set up with the aim of improving aspirations for youngsters and tackling youth violence through art and culture, was the driving of bringing the sculpture to the county.
The unveiling of the statue kick starts a month of events raising awareness of the effects of knife crime and looking at addressing its causes.